A police officer fatally shot a Black man, identified as Daunte Wright, after he was pulled over in a Minneapolis suburb Sunday, leading to clashes between protesters and law enforcement. On Monday, the police chief for the city of Brooklyn Center said the officer, identified as Kim Potter, intended to use her Taser but instead grabbed her gun and shot Wright.

Police released bodycam video of the shooting at a news conference. In the video, the officer who shot Wright shouted “Taser” multiple times before firing her gun at Wright at close range while Wright was in the driver’s seat.

“I just shot him,” the officer said as the car drove away.

Sunday’s shooting happened in the midst of the Derek Chauvin trial for the killing of George Floyd.

Police said the incident occurred just before 2 p.m. Sunday. After Wright was pulled over, police determined there was an outstanding warrant for him. When they tried to arrest him, he got back in his vehicle, and the officer fired at Wright. Police said his vehicle traveled several blocks before hitting another one.

Wright was pronounced dead at the scene. No one in the second vehicle was hurt.

A crowd began to gather at the crash scene later in the afternoon. Just after 6 p.m., protesters tore down crime scene tape, with the crowd and the victim’s family demanding answers from law enforcement, CBS Minnesota reports.

A woman who said she’s the driver’s mother, Katie Wright, told the crowd her son — 20-year-old Daunte Wright — was the man who was shot. She said Wright’s girlfriend was in the car with him during the traffic stop. Police said the woman suffered non-life-threatening injuries in the crash and was taken to a hospital.

Protesters later gathered at Brooklyn Center police headquarters. Law enforcement formed a human chain to protect the building and started using flashbangs and tear gas to try to disperse the crowd, according to CBS Minnesota reporters at the scene.

EXCLUSIVE! Gudi Padwa 2021: Pranutan Bahl Reveals Why This Festival Means A Lot To Her 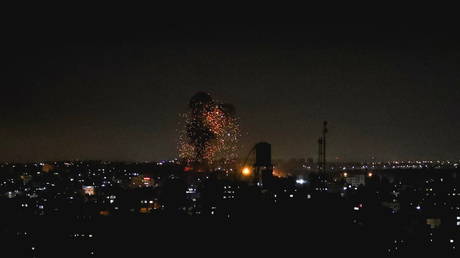