The London, Ontario man who swerved off the road and ran over a Muslim family of five did so deliberately and the incident is now considered a hate crime, police said. Canada’s government reacted by condemning Islamophobia.

Nathaniel Veltman, 20, was arrested on Sunday after allegedly jumping the curb and striking the family, before driving off at high speed.

“There is evidence that this was a planned, premeditated act, motivated by hate,” Detective Superintendent Paul Waight of the London police told reporters on Monday. “It is believed that these victims were targeted because they were Muslim.”

BREAKING: London ON police say they believe 20-year-old driver intentionally rammed his truck into a family last night, killing four members of the family and injuring their young son. Police allege the family was targeted “because of their Islamic faith.”https://t.co/tKy5VvXfFL

The authorities have not released the names of the victims yet, citing family wishes, but provided their ages. A 74-year-old woman died on the scene, while a 46-year-old man, a 44-year-old woman and a 15-year-old girl were pronounced dead at the hospital. A 9-year-old boy survived and is currently in the hospital with “serious but not life-threatening” injuries.

Veltman does not have a criminal record and was not known to be a member of a hate group, police said. He was arrested without incident in a mall parking lot and charged with four counts first-degree murder and one count of attempted murder. He is due back in court on Thursday.


“We grieve for the family, three generations of whom are now deceased,” London Mayor Ed Holder told reporters. “This was an act of mass murder, perpetrated against Muslims, against Londoners, and rooted in unspeakable hatred.” Holder described it as the worst mass murder his city had ever seen.

Located in southern Ontario, about halfway between Toronto and the US city of Detroit, London has about 400,000 residents and a large Muslim community. Arabic is the second-most-spoken language after English, according to Holder.

Sunday’s incident was the worst attack on Canadian Muslims since the January 2017 shooting that killed six at a Quebec City mosque.

BREAKING: The National Council of Canadian Muslims (NCCM) is beyond horrified and demands justice after the horrific hate-motivated car attack on a Muslim family in London, Ontario who were out for a walk on Sunday evening. pic.twitter.com/o1wXqjpnRb

“This is a terrorist attack on Canadian soil, and should be treated as such,” said Mustafa Farooq, head of the National Council of Canadian Muslims.

Prime Minister Justin Trudeau said on Monday he was “horrified” by the news from London and sent his support to those “terrorized by yesterday’s act of hatred.”

“To the Muslim community in London and to Muslims across the country, know that we stand with you. Islamophobia has no place in any of our communities. This hate is insidious and despicable – and it must stop,” the PM added.

To the Muslim community in London and to Muslims across the country, know that we stand with you. Islamophobia has no place in any of our communities. This hate is insidious and despicable – and it must stop.

Federal Minister of Families, Children and Social Development Ahmed Hussen also sent a message of condolences and solidarity to the Muslims of Canada.

“Islamophobia has consequences,” he tweeted in French. Hearing news of “another Muslim family being attacked” was painful as a father, as a Muslim and as a Canadian, he added. “There is no place for hatred in our country.” 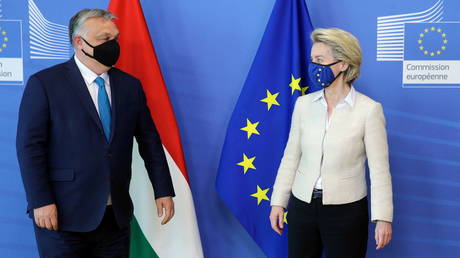 Brian Sicknick’s partner says she once supported Trump, but now views his failure to honor Capitol cops’ heroism as ‘unforgivable’ and ‘un-American’
58 mins ago